Where do we go for the best interest rate in town? 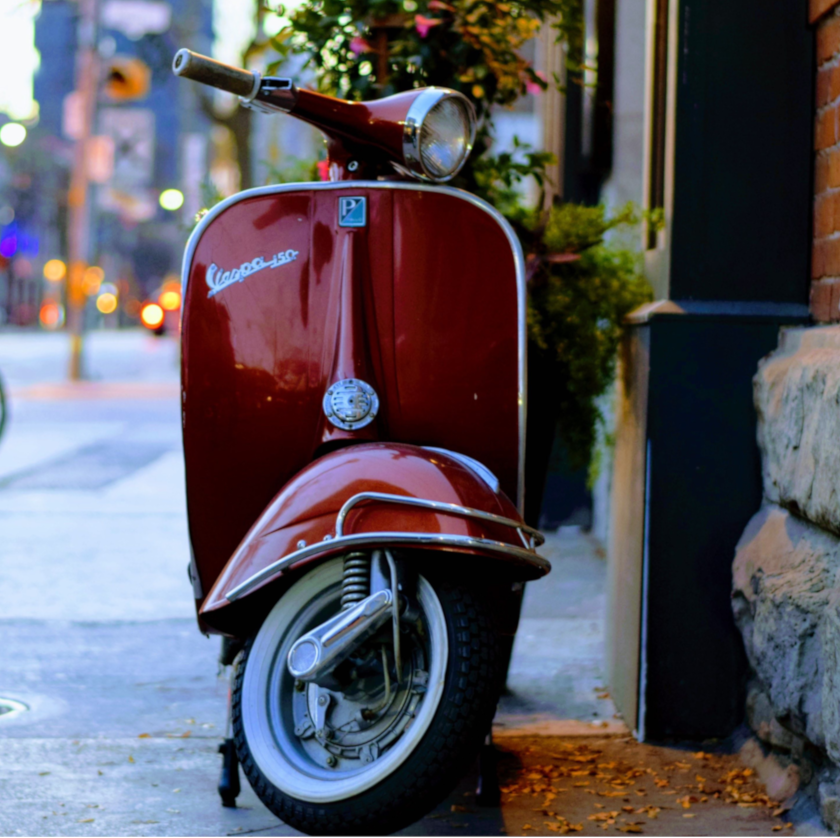 I’m not much of a cowgirl. I wish I were. I mean it’s super sexy jumping on a feisty horse and riding off into the glowing orb of a stupendous adventure. Yes, there was a point in my life when I loved cutting through the Cape Town traffic on a red Vespa, but it did feel like every trip was a huge risk and eventually I ended up walking most of the time – especially when the Southeaster swept in, instead of taking the Vespa.

The truth is I’m moderately conservative in my life and money decisions. A case in point is the portion of my portfolio that I know I’m probably going to use within the next five years. All of that goes into interest-bearing funds or accounts.

In the financial services industry we used to tell investors that five years is the minimum time span for a share or equity portfolio. But with the JSE All Share battling to beat inflation over the past five years, I wouldn’t recommend putting your money into 100% shares (equity) if you don’t have the luxury of sitting through potentially down or sluggish market cycles for at least seven years, and then even some more if markets crash just before the end of your seven-year investment horizon.

Internationally, partly helped by a weakening rand, the returns over the past five years were magnificently better than locally. But going forward, there too is the risk of down markets and a rand that might just surprise us with its strength (unlikely, but possible). So, I wouldn’t take on that level of global equity market risk and currency risk either if I weren’t able to commit my capital for at least seven years.

So, where do you put the shorter-term part of your portfolio then? Where are the highest interest rates?

Over the past 13 months the repo rate has dropped from 6.75% to 3.5%. The repo rate is the rate at which our central bank, called the SA Reserve Bank, lends money to our commercial banks, like ABSA, FNB, Nedbank and Capitec. It’s unusual to get more than the repo rate on a 1-day notice deposit with your bank. For example, Nedbank currently offers 3% on a 1-day deposit for amounts above R50 000. (TymeBank offers 4% from the first day that your money hits their Goalsave account.)

In comparison, African Bank offers 10% per year on a 5-year fixed deposit.

The risk of losing money

African Bank has to offer a higher interest rate on their 5-year fixed deposits than a 1-day notice deposit with a bank with a stronger balance sheet because their 5-year deposits carry more risk. Having been under curatorship in the not so distant past, depositors are still cautious about the risk of not getting all of their capital back in case the bank gets into trouble again. It’s called counterparty or default risk and explains about one-fifth of the 10% on offer. The government, which carries almost no counterparty risk due to their power to print more money to repay depositors’ capital, currently offers 7.9% on their 5-year retail savings bonds (similar to a 5-year deposit). If African Bank had the ability to print their own money, they would not have to offer more than 8% on their 5-year fixed deposits.

The risk of not beating inflation

The rest of the difference, i.e. the gap between 8% and 3% with Nedbank, for example, can be explained by a variety of factors, the bulk of which make up the risk of inflation and the repo rate suddenly shooting up and depositors not being able to access the new higher interest rates with their capital because they are locked into a 5-year contract. It’s also compensation for the inconvenience of having your capital tied up, i.e. any 5-year deposit needs to make up for the lack of liquidity of your investment. For the term of the contract you cannot pursue other investment opportunities.

If hyperinflation kicks in during the 5-year contract, there is the risk of the investment not keeping up with inflation and the capital effectively being worth less in after-inflation terms than when you deposited the money.

If you want to know more about risk, there’s this article I recently wrote for my employer on the risks of interest rate products.

So, what is the verdict on fixed deposits?

Five-year fixed deposits offer the highest interest rates, but they come with the risks mentioned above: namely 1) the counterparty defaulting and not being able to pay back all of your capital with interest, and 2) not keeping up with potentially rapidly accelerating inflation over the next five years. If you want to decrease these risks, you could opt for a two- or three-year fixed deposit instead, but they would offer lower interest rates than five-year deposits because they don’t have to compensate you to such a great extent for the additional risk you’re taking on and, importantly, for the inconvenience of not having access to your capital for five years.

Or you could settle for the government’s fixed deposit called the RSA Retail Savings Bond. As mentioned before, the risk of government default over the next five years is small and once the money has been with them for at least 12 months you have the option to restart your investment in case higher rates are on offer later. If you have a 5-year bond, for example, you can restart it as a 2- or a 3-year bond after a year. The restart option significantly reduces the inflation risk of the 5-year Retail Savings Bond.

Remember the rates on offer change all the time, so please double check these figures should you bump into this post weeks or months after it was published. Walter from RateCompare can help with this. He does all the hard work to keep us up to date in terms of which institution is offering the highest interest rates on fixed deposits ranging from three months to five years.

What about money market funds?

Money market unit trust funds don’t offer a guaranteed rate. They trade in all sorts of different cash instruments available in the money market and issued by banks and other large institutions. Because of the variety of institutions backing these financial instruments, the counterparty risk is low. It’s highly unlikely that more than one bank will default at a time. If one bank gets into trouble, as happened with African Bank in 2014, only a small portion of your money market fund will be affected. Money market funds claim that their yield (income) doesn’t drop as quickly as that of a notice deposit when interest rates drop rapidly, as was the case in 2020. They also claim that they take part in upward ticks in the interest rate sooner. As interest rates go down, their yields go down; as interest rates go up, their yields go up. Their risk of not keeping up with inflation and an upward-ticking repo rate is therefore low.

When choosing a money market unit trust fund, look for two things: 1) a large fund that’s been around for a while and has long established connections on the cash trading desk and 2) a fund with a low total investment cost (TIC), preferably not more than 0.3%. Generally, the large fund with the lowest TIC will give the highest return among money market funds. The Allan Gray Money Market Fund returned 7.1% for the 12 months to 31 July 2020. Looking at its monthly yield of 0.45c per unit (worth one rand) in July, don’t expect more than 5.5% for the next 12 months, though. All of this information is on the fund’s minimum disclosure document, also called the fact sheet, which is updated every month.

Unlike fixed deposits, money market unit trusts give you quick access to your capital. The money should be in your bank account within 3 days of giving a withdrawal instruction.

What about other interest-bearing unit trust funds?

Money market funds form only one category under the greater group of unit trust funds that the Association of Saving and Investing in SA (Asisa) classify as SA Interest-Bearing. The money market category has the least volatile returns of all interest-bearing funds and their unit price normally stays constant at R1 per unit. In other words, your capital amount stays constant, similar to a fixed deposit. Unlike a fixed deposit, your income varies from day to day.

The funds in SA interest-bearing categories other than money market funds take on more counterparty and other risk in an attempt to outperform money market funds. Their capital value and income vary from day to day. Checking on their minimum disclosure documents what their lowest and highest annual return has been since inception gives you a good idea of how volatile their returns are and whether you would be comfortable with this. But bear in mind that older funds will show greater volatility in returns because they've been through greater up and down interest rate cycles. Interest-bearing funds other than money market funds normally suit investors that want to beat the money market over a period of one to five years. They’re not ideal if you’re investing for less than a year as they sometimes have months of negative returns. The SIM Enhanced Yield Fund is one example of an interest-bearing unit trust fund aiming to outperform the money market. There are various others widely available on unit trust platforms.

So, who has the best interest rate?

African Bank currently offers the highest interest rate on longer-term fixed deposits with no limit on the size of the investment. For shorter-term deposits (less than a year), TymeBank offers the best rate, but they can only help you with amounts of R100 000 or less.

Beware, the ‘best’ rate is not the highest rate, though. The highest rate on offer can end up in tears in you don’t get your capital or promised interest back, or when you’re locked into a lower interest rate than the inflation rate if a hyperinflation scenario plays out for South Africa.

The best rate is the rate that beats inflation by the biggest margin over your investment period at the level of certainty of getting your capital back that you as unique human being are comfortable with.

Where do my own shorter-term deposits sit?

Personally, I keep about R50 000 in my Nedbank notice deposit currently earning 3% per year. Not a great rate, but I want to be able to request a withdrawal before I go to bed and wake up seeing the money in my current account the very next morning. In case of a real emergency even three days can feel like a lifetime. I also keep the maximum TymeBank will accept in one of their Goalsave accounts currently earning 6% (it’s been with them for more than 90 days) and I’m willing to give 10 days’ notice on a withdrawal for an extra 1%. The rest is in the Allan Gray Money Market Fund with an estimated 5-5.5% return net of fees over the next 12 months, accessible within 3 days.

I’m also eyeing the 7.75% per year on offer from African Bank on their 2-year fixed deposit, fully knowing the best interest rate comes with risks and maybe one or two sleepless night. Maybe I’ll risk it, maybe I won’t. Whichever way, I have a feeling it won’t give the same thrill as driving a Vespa up the slopes of Table Mountain on a perfect summer night.